Gabriel Ferrater and Robert Musil: between science and literature 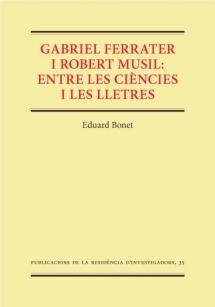 This book is the result of two coinciding sets of circumstances in Eduard Bonet's long creative career. The first and most significant of these is his profound knowledge of Gabriel Ferrater, based on his admiration for the latter's work and the vitalistic nature of Ferrater’s life, while the second is their vocational affinity for mathematics and humanities, and the concerns the two men shared with respect to the theory of art, literature, linguistics and poetry.

This is not the first time that the Residence for Researchers has staged a dialogue between painting and poetry, or poetry and science, as part of our ongoing efforts to create a space for thought through which we can combine diverse creative experiences. Since the Residence was founded in 1998, we have placed an emphasis on creating formats and discourses that enable us to develop a dialogue between arts and sciences. This approach has been reflected in a number of series of lectures, often accompanied by pictorial exhibitions that bring together poetry and mathematics, or fractals and art. “El traç que pinta” (The line that draws) and “Art, ciència i Dalí” (Art, science and Dalí are just two of the events that have marked – and continue to mark – the character of the Residence for Researchers. Another similar example was the “Simposi Gabriel Ferrater: una celebració” (Gabriel Ferrater Symposium: a celebration), which took place at the Residence for Researchers on 8-9 November 2002.

The Symposium was the idea of the poet Marta Pessarrodona – who fortunately knew Gabriel Ferrater very well – and of two friends and admirers of his talents, Salvador Oliva and Eduard Bonet. The Symposium's programme, which was rooted in feeling, admiration and friendship, did not disappoint in any way. In the words of Marta Pessarrodona, the event featured “first-hand testimonies that ably served this attempt to initiate a global assessment of Gabriel Ferrater an intellectually rich, polyhedral figure imbued with great academic rigour”. Many of those who attended the event – including Pere Ballart, William Cliff, Jordi Cornudella, Jordi Julià Garriga, Jordi Carbonell, Narcís Garolera, Blanca Palmada, Josep M. Pujol i Sanmartín, Enric Trillas, Carles Miralles, Jordi Sarsanedas, J. F. Yvars, Sam Abrams, Josep M. Fulquet, Pere Rovira, Ferran Toutain, Ricard Salvat, Jordi Galli, Andreu Gomila, Jordi Sala, Joan Guitart, Oriol Bohigas, Salvador Clotas, Ana M. Moix, Carmen Rojo and Joan Servera — were either people with whom Ferrater had had dealings, or who knew his work or were personal friends.

The Residence of Researchers’ collection of publications could not fail to include a book on the work of one of the leading figures in our literature, a man who, without any doubt, represented a watershed. While it is difficult enough to write a book (as Eduard Bonet has done) on such a polyhedral personality, and given the permanent restlessness of the Residence for Researchers (which agrees with the maxim “Verba volant scripta manent”), asking all the participants to write a testimonial text for their participation in the Symposium seemed to us to be a massive enterprise. And so, Marta Pessarrodona, the soul of the event, suggested that Eduard Bonet write a book reflecting the spirit of the Symposium, at the same time as giving a personal, wider view of the thought and works of Gabriel Ferrater.


Dr.Francesc Farré
Director
Dr. Lluís Calvo
Science and Culture Director
To order this publication please contact us at :
info@residencia-investigadors.es
« back